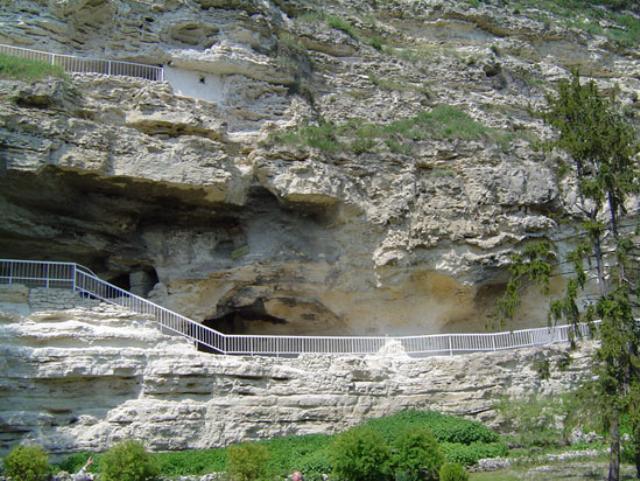 The Aladzha monastery is about 4 km long, and lies in the magnificent natural scenery on the Franga plateau slopes. Aladzha means “multi-coloured” in Turkish, a term usually used to describe brightly coloured silk textiles.

Some 12 millions of years ago, the whole Northeastern Bulgarian land was part of the Sarmatia Sea bottom. After a terrible crash-in, the result of a tremendous earthquake, the Dobrudzha plate split up and large pieces of land slipped into the sea. Thus, the 3 km-long wall formed where the ancient rocky monastery cells and churches are hewed in. The dens forests hid the place on all sides and served as a refuge for the persecuted or for the people seeking isolation. Here the Thracians erected stone monuments, called megaliths, to their gods. There are traces of settlements and large farm estates of Roman times. In the 1-st century AD, the first Christians came to that site to carry out their ceremonies undisturbed. In the 4-th century inhabitants of the lands of nowadays “Zlatni Pyasatsi” and “Sveti Konstantin” resorts found refuge here from the invasions of the Goths and Huns. The nearby settlement was destroyed but the monastery remained. Archaeological finds prove that in V-VI c. the monastery was still functioning.

But the really rich history of the monastery is due mainly to the Hesychast monks in the 13-14-th centuries – followers of an doctrine in Orthodox Christianity. In that period many monasteries outside populated areas appeared, in inaccessible forests and on rocks. The two churches and the monks’ cells are dug high in the rock, forming two storeys, connected via wooden stairs. The church is 11 m long, 7 m wide and 2 m high and was richly painted. At about 800 m from this place the so-called Katakombi – a similar monastery – is situated. This place, managed as a museum reserve, is one of the intransient spiritual treasures of Bulgaria, evidence of rich culture and a centuries – old Christian way of life.