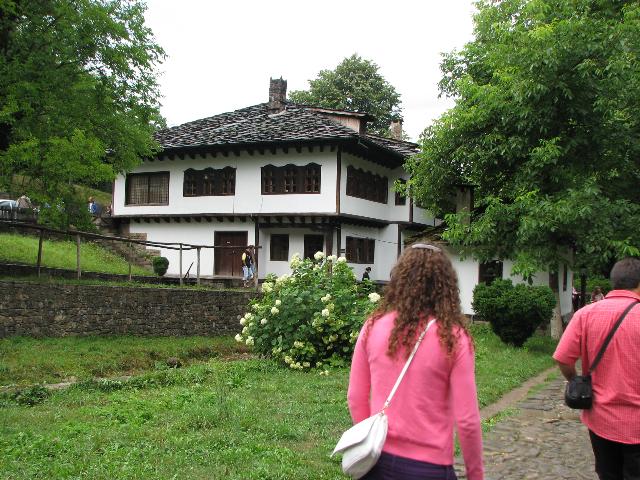 The “Etar” Open-air Ethnographic Museum is located 8 km south of Gabrovo. This unusual museum was established by the Gabrovo citizen Lazar Donkov (1908-1976). On 7 September 1964 his idea became a reality and the museum was officially opened. The 50 sites, spreading on 7 hectares, show the architectural diversity, lifestyle and culture of Gabrovo and the Gabrovo region during the period of National Revival.

The first items from the exposition are national technical facilities, actuated by water. In 19th century a great number of lathes, water mills and fulling mills were built in the valleys of the rivers Yantra, Sivek, Panicharka and Rositsa. Now the water of the Sivek River actuates 10 facilities in succession through an irrigation ditch – a whetstone, two water mills, two rolling mills, a fulling mill, lathes for wooden articles, a woollen braiding mill and a saw mill. The working mechanisms of all these facilities are original and operational.

The craftsmen’s market street is located left of the river and represents an ensemble of residential buildings with handicraft and merchant activity premises. The rich architecture from the period of the National Revival is shown in 16 specimens – houses with protruded bay-windows, carved and painted columns, rosettes on the doors and spacious verandas. The following handicrafts have been recreated in the Etar market street: bakery, shoe making, goatskin clothing, tannery, cartwright’s craft, wood-carving, making national musical instruments, vegetable oil production, bell-making, furriery. The second floors of the houses exhibit looms, icon paintings, and herbs that are typical for this mountain area are sold there. Here people can buy souvenirs made by the hand of the craftsman.

Places of interest in the “Etar” also include the clock tower, a number of stone drinking fountains, bridges, cafes, hotels and food and recreation establishments.

Interesting in the region Gabrovo

The “Assumption” monastery of Sokolski