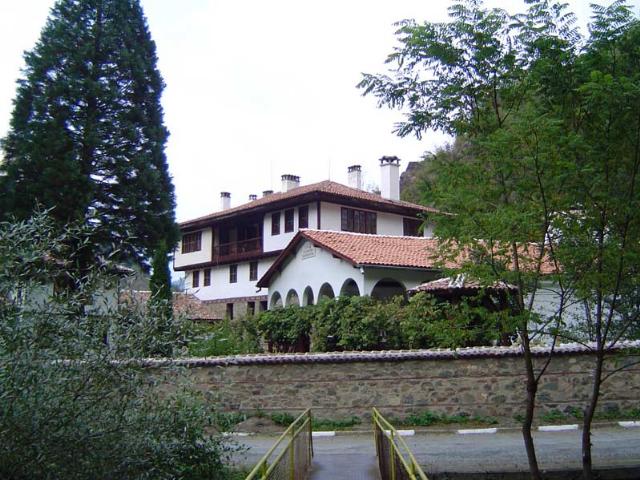 The monastery in Ossenovlag with the official name “Holy Virgin”, also known as Sedemte Prestola, was built in the beautiful valley of the smal River Gabrovnitsa in northern Stara Planina.

As the legend goes Sedemte Prestola was established by seven boyars, who came from Bessarabia in 11th c. and settled here with their families. As in most Bulgarian monasteries, a high stone wall surrounds Sedemte Prestola, and the church is situated in the middle of the inner court. The bell tower consists of two bells with a wooden and a metal clapper. The small court is impressive for the tourists with its well-attended garden with a variety of flowers, blossoming bushes and old trees, one of which is a venerable sequoia. There are seven separate altars in the church – something no other Bulgarian temple has. The four main altars form a cross and are separated from the main hall by inner walls. The other two are close to the door and are even more isolated – they can be reached only through the small entrances of two chapels. The last altar, the seventh, is situated immediately opposite the entrance of the church. Each throne represents a separate chapel with its own murals and iconostasis.

The massive chandelier “Horo (Ring dance)” is also impressive with its fine fretwork and religious themes paintings. All murals in the church are over 100 years old.

The monastery has its own library, which houses Orthodox books, including one that is a gift from the Russian empress Ekaterina II.

Interesting in the region Sofia

Katinski Piramidi (the Pyramids of Katina)

The “Assumption” monastery in Cherepish